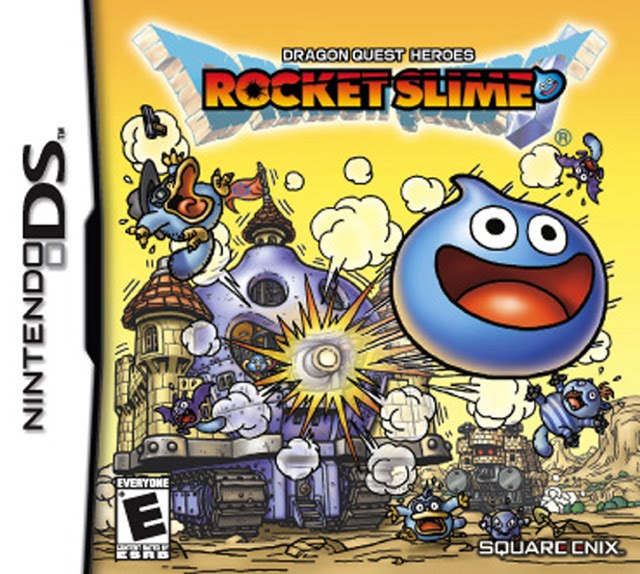 ESRB Rating = E for Everyone

Price = $10.00
Players = 1-2 (if you have 2 copies of the game and 2 ds’)
‘The 100 strong population of Boingburg has been slimenapped! Only you, Rocket, can uncover the truth behind this evil scheme and save your fellow slimes!
Stretch, spring, and shoot your way through this action-packed adventure set in the Dragon Quest world.’
HOW DOES THE GAME LIVE UP TO IT’S EXPLANATION/BOX ART? (10/10)
At first glance this game looks amazingly cartoon-y in comparison to most Dragon Quest games that are very animeoriented (illustrated by Akira Toriyama, artist of Dragon Ball) in the first place. So if you are attracted to cute anime cartoon drawings in your decision on videogames, you would most likely pick up this title up, and give it a once over.
The description of the game is dead on. You are the only slime not captured by the baddies, and you are tossed directly into the first world to start collecting items, enemies, and your town folk.
HOW IS THE GAME PLAY? (9/10)
This game’s interface is so easy to use that someone that’s never played a video game could pick this up and play it. I really enjoyed the simplicity and straight forward style of the game. If you love Super Nintendo style Blimp angle mode games likeChronotrigger, Zelda, or Secret of Mana, it’s set up just the same. But more along the lines of a Zelda style game.
You are the main weapon in the game, by holding down the button and slinging yourself at your enemies.That you can catch and use as weapons or toss them on the home transports to have copies of them back in your town. You can collect every item in the game by doing the same thing, and each item in the game is used for creating items for tank battles.
What are tank battles? Well in the game you do end up getting into a lot of them to save more of your slime brethren and continue the plot line of the game. (It’s also the multi-player) Through out the game you come to hub bases that have Tank challenges. Where you get three slimes as helpers and the items that you have are used as ammunition to knock the enemy tank’s HP down to zero, for the win.
The only problem that I have is the game is so easy that i played through the entire game and didn’t die at all. The confrontation in the game is pretty much comparable to turning on the television. It’s really that easy.
HOW DOES THE GAME LIVE UP TO IT’S GENRE? (10/10)
Well if you purchased this game thinking this game is an turn based rpg it is not. In fact it’s far from it. This game is a Classic style Zelda clone kinda platformer. Still has the Dragon Quest world, monsters, and style. But it plays just like an easy version of zelda.
THE ‘GAME OVER’ ALL? (97%)
I highly suggest this game. It’s one the cheaper games on the system, it’s fun and easy, and if you can find someone else with the game the Tank battles are a lot of fun.
If you are a less experienced Gamer this is a perfect title for you to start with. The puzzles are easy to figure out, the enemies are easily defeated, and the learning curve is self explanatory.
If you don’t play games but your children have a DS and complain that their games are just too hard. This game is definitely for them.
arbitrary credit for gore and nudity = 0
-Felix “the Brett” Prescott