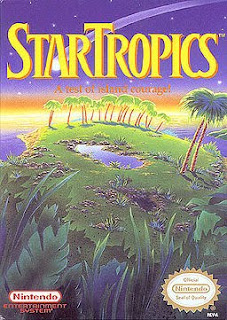 PRICE = $5.00
PLAYERS = 1
‘A teenager’s dream vacation on a tranquil south sea island… A shotting star!? … It’s an omen of disaster! Mike’s archaeologist uncle has been kidnapped. Mike alone can rescue him. Thus begins the test of island courage.
Happy villagers eagerly assist, but endless enemies threaten every step. Mike’s search leads him through the lush wilderness of the StarTropics. As he travels on foot, or by submarine through this sunny land of dark secrets and deadly peril, Mike is a tireless fighter.
Using common sense, an island yo-yo, magic potions, and mysterious new weapons and skills, Mike must defend himself. Restore his strength with coconut milk, help him defeat strange creatures, sea monster and hidden attackers.
Join Mike in his adventure. Journey the StarTropics.
Modern-day adventure in an Island Paradise! ‘
HOW DOES THE GAME LIVE UP TO IT’S EXPLANATION/BOX ART? (7/10)
The cover of this game leaves a lot to the imagination. It’s an excellent vacation resort shot, but it does make you think about what you are in store for. But, It doesn’t really give you any idea of what you are going to be playing at all.
The explanation of the game opens up everything you are hoping for in a game. An interesting sounding adventure plot line with one of my favorite weapons, a yo-yo.
HOW IS THE GAME PLAY? (10/10)
This game plays to perfection. It’s a little strange when you first start. It has the Dragon Warrior/Final Fantasy style top down view when you are searching the island and towns. Yet, when you arrive into an actual dungeon it takes a quick switch to a pseudo zelda style play.
Your character Mike changes from the chibi version RPG character to a full blown character. The play field is sorta new and different for a nintendo title. There is a lot of random block jumping that occasionally open up new areas. Finding some of those really was the only pain of the game. But, i found no actual flaw in the game play.
(Game Note : If you didn’t buy this complete you will reach a point where the robot will tell you to get the letter wet. In the original box, there was a note that came with the game. Once submerged in water you would get a code that you had to type into the game. A really cool concept but, unfortunately you probably didn’t get it complete, so just jump onto GameFaqs.com and get that code.)
HOW DOES THE GAME LIVE UP TO IT’S GENRE? (10/10)
StarTropics kind of made it’s own style action platformer. I can’t really think of any game on the nintendo that plays anything like it other than the few quirks of the overmap RPG style searching. The in game battle style is sorta like Zelda but not really at all. It’s funny how jumping can add such a change to top down adventure game.
THE ‘GAME OVER’ ALL? (90%)
I really enjoyed playing through this game. It was a large change to the same old platformer that most of all the nintendo games are. Start at left go to the right until the boss fight. This game doesn’t have anything in that range. The designers took the best of the best out of the top ranked games and made their own baby.
I highly recommend this game.
arbitrary credit for gore and nudity = .05%
(For island babes in bikinis)
-Felix “the Brett” Prescott 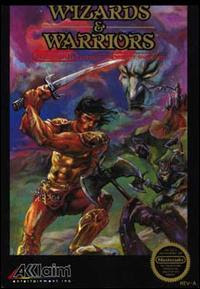 Price = $5.00
Players = 1
‘The Journey of Kuros continues…..
You are Kuros, the knight warrior Hero of the books of excalibur. Your journey begins deep within the woods of Elrond, where even the wind obeys the Supreme Wizard, Malkil. But Malkil has strayed from the path, and is now part of the dark side.
Buried within the catacombs and dungeons of Elrond lies the key to your quest. The powers of levitation, the cloak of darkness, and the mysterious potions only Kuros can drink will be revealed to you.
In caverns of fire, through demons that fly and crawl, against the soldiers of the undead you must continue. No sorcery can prevail. For you are the only knight with the strength to wield the Brightsword.
The prisoner of the wizard awaits. She calls to you from Castle Ironspire.
But the wizard is watching you, warrior, And this tale has just begun. ‘
HOW DOES THE GAME LIVE UP TO IT’S EXPLANATION/BOX ART? (10/10)
Now before I get started, I am a sucker for barbarian anything so this cover catches my attention instantly, but once you start the game you are not a barbarian at all, you are a knight. Once again, fooled by Nintendo box art. But! The back of the box does tell me that I’m a knight from excalibur, so I’m not as disgruntled as I would have been if it didn’t explain this to me on the box.
The game does in fact live up to the explanation perfectly. It doesn’t really tell you anything about the game play other than a few clues on some of the items you will recieve. But, the images don’t try to trick you like a lot of the other games i’ve played have.
HOW IS THE GAME PLAY? (10/10)
Kuros has some amazing skills indeed in this platformer style game. He fights flawlessly with his sword style, he can jump like Jordan, and he can run faster than Mario. But, unlike most platform style games this one moves all over an area map instead of just going right. Which is a great change of pace.
The potion power ups in this game are kind of odd. A pink potion grants you huge jumps, the blue makes you run even faster, and the red protects you from small damage. The other items you gain from from giant treasure chests actually stay in your inventory and you can use them for the rest of the game. Other than a few items that switch out.
Level progression only continues if you find all three keys and get enough money to make the knight move out of the way so you may fight the lurking boss.
HOW DOES THE GAME LIVE UP TO IT’S GENRE? (10/10)
This is an amazing action platformer. There are very few games of this type that let you free roam an entire map on the nintendo. Most of them once you’ve moved forward you can no longer move back, because of the screen stop. In Wizards and Warriors you can freely move back and forth at will and enter doors to find other areas with goods in them. All around excellent game.
THE ‘GAME OVER’ ALL? (100%)
This is just one of those gems on the system that is rare to find. Out of so many titles with awesome box art, this one actually lives up to it. This should be in your 8 bit collection as one of your favorites. (disclaimer : IronSword -wizards and warriors 2, and wizards and warriors 3 – not so much. )
arbitrary credit for gore and nudity = 1 point
(after you defeat each boss you save a pretty much naked woman that kuros pays no attention to)
-Felix “the Brett” Prescott 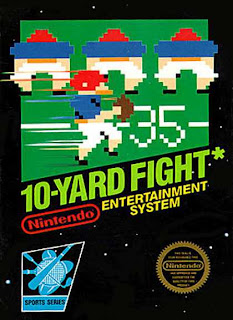 Price = $ 2 -5.00
Players = 1-2
‘You’re the quarterback in this amazingly real football game!
Enjoy realistic grid iron action as you move your team up and down the field to victory! Run, pass, kick, punt you call the plays in this true to life football game. Play against the computer, or against a friend, for hours of real football action. The sights, the sounds, and the plays are so real, you’ll think you’re right on the fifty yard line! ‘
HOW DOES THE GAME LIVE UP TO IT’S EXPLANATION/BOX ART? (2/10)
The cover of 10 yard fight is an actual screen shot of the game. So it gets a point for showing you exactly what you will be playing.
The back explanation is a huge lie. This game is no where near a real football game. I mean at the kick off your receiving team is standing in a rectangle in which your receiver (in the middle of the rectangle) catches the ball and you head upwards towards that 6 points.
HOW IS THE GAME PLAY? (1/10)
The game play is just awful. Sometimes when you hike the ball to early you are instantly downed. So if you don’t wait for your half back or other player to run passed your quarterback before hiking the ball you are screwed. Now, that doesn’t sound too bad other than it takes about twenty seconds for him to get passed you. And sometimes you just randomly kick the ball for a field goal or punt for no apparent reason.
The character models are all the same guy just colored differently which isn’t anything new on nintendo and it doesn’t lose points for it, but the hilarious thing is all of their tackle sprite action looks like a screwed up version of frogger jumping across to his goal.
HOW DOES THE GAME LIVE UP TO IT’S GENRE? (1/10)
This is easily the worst football game I have ever played in my life. And, the fact that it says that I will feel like i’m on the fifty yard line is just bull crap. This game feels like i’m playing a strange version of football that doesn’t know what it is.
THE ‘GAME OVER’ ALL? (13%)
The only reason to play this game would be if you got it for less than a dollar for a good laugh. There are so many other football games on the nintendo that are better. Well, all of them are better. Just stick with the Tecmo Bowl or Super Tecmo bowl.
arbitrary credit for gore and nudity = 0
-Felix “the Brett” Prescott 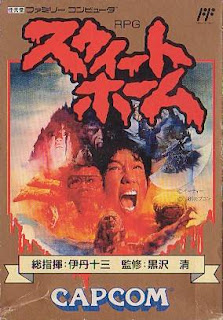