AND NO NOT THIS

What’s this about then?

The same thing everyone always complains about. Who’s better? Which system is the one to buy. Why is better than the other system. You know all the junky junk blah blah boo hoo fan boy blabber.

So where do we start?

ATARI VS COLECOVISION? (OR ALMOST EVERYONE?)

NINTENDO VS SEGA (Or Everyone?)

3DO VS ATARI JAGUAR?

SONY VS SEGA VS NINTENDO?

Let’s start where It started

This is a PONG machine.

Well if you do not recall, here is a screen shot.

In this title it was you VS the computer or a friend. You were a line on one side, and the enemy was the line on the other side. The Dot was the ball or puck if you pretended it was Air Hockey. Regardless, in the 70s and into the 80s there were roughly about 700 different models of the pong machine, or pong like machines. Some had different pong modes.

Here is a quick clip from Wikipedia info about The beginning of PONG!

“Pong (marketed as PONG) is one of the earliest arcade videogames; it is a tennis sports game featuring simple two dimensional graphics. While other arcade video games such as Computer Space came before it, Pong was one of the first video games to reach mainstream popularity. The aim is to defeat the opponent in a simulated table tennis game by earning a higher score. The game was originally manufactured by Atari Incorporated (Atari), who released it in 1972.”

So we have one of the first arcade machines. Dedicated to a machine that doesn’t do too much but is a hit!

So, after the arcade world starts to increase in popularity.  The first home Pong machine releases around 1975, and everyone that is in the world of electronics makes their own version and releases. Atari decides to get in gear and start creating new home experiences, which are new titles, you know, that aren’t PONG. But that’s not the point of this post.

This is to show you the VS!!! mentality.

So here are a few more Models from the top companies in the 70’s fighting for your tv.

Now if you go yourself and do a Google Search of Home Pong Machines. You will get an AMAZING amount of machines, redo machines, newer updated versions of the same machines. Machines that are one player, two player, even 4 player! Piles and piles of these things all dedicated to one game.

And guess what. That’s all their was. So if you had a pong machine, you were the shit. But, Who made a better version? No one really. I’ve played several of these machines. They all do the same thing, the handles (controllers) are sometimes slightly different, but only to how you hold them. If they control up and down pretty well, they are good to go. So, what created a rivalry other than the obvious? (Money)

After these companies had created a way to have an arcade in someone’s house. They were all over it. Doing their best to create in home experiences. Having all your friends over to the house to play video games instead of going down to the Video Arcade .

Which Brings up one of my favorite commercials of all time.

This isn’t about pong, but applies to the Arcade comment I put above it.

So to get to the full circle point of the start of my VS’s posts. Pong MACHINES go first. Because, it was the first. The name on your pong machine could have influenced you to different consoles in the future. It could have just made you go straight to the Atari 2600. Which was pretty much the Market KING at the time, but at the time. It was which PONG machine is better than the other PONG machine? WHICH ONE DO I GET TO DO THE EXACT SAME THING!! WHICH ONE LOOKS LESS GENERIC?? AHHHHHH!!! PONG PONG PONG!!!

If you are wondering, since that’s why you are still reading. This is my favorite Winning Pong machine. 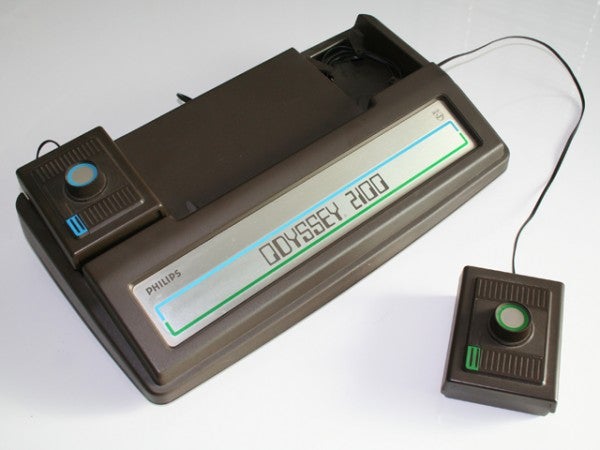 Have a good NERDY day, and check back for VS Round 2!