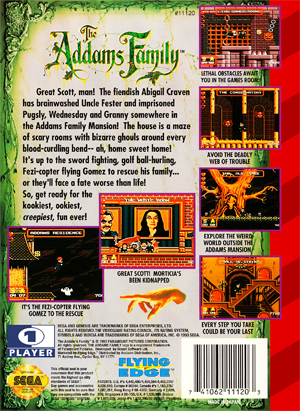 Price = $5-10
Players = 1
PASSWORDS = Yes
HOW DOES THE GAME LIVE UP TO IT’S EXPLANATION/BOX ART? (10/10)
Well unlike most game boxes, this one doesn’t lie to you. I’m not exactly sure why the focus so much of the text on the weapons Gomez can get to attack with since they are pretty short lived in the game. But, They did.
The game is exactly what it says it is. You are Gomez and you must save the family from the clutches of spooky stuff.
HOW IS THE GAME PLAY? (7/10)
If you have played Pugsley’s Scavenger Hunt on the NES, this game plays exactly the same, but with a lot of upgrades. Since this is on the Sega Genesis.
If you haven’t, here is how it works.
This game is a platformer with Mario mechanics (in a way). You need to go through which ever areas there are, by jumping on enemies and climbing your way to things, or just going all the way left or right. The game has some bounce physics, meaning if you jump on something’s head, it will give you a jump boost. Helping you to get to higher areas or just continuing to bounce on enemies heads.
The game loses some points for some of the less interesting areas of play. There are a lot of those walk as far out on this ledge with a roof above you to jump to the next section.. You missed fall to the bottom and start over. I’ve never found these parts to add to game play. These things are just there to piss you off and slow you down.
It also loses a point for mentioning this weapons as if they are amazing. The Golf ball is worth having for tossing it, (which makes it bounce across the screen killing enemies) But the sword has a very short distance attack, and you usually get hit using it. But, all items you pick up, other than the fez-copter, gives you an extra hit point. So if you have the sword, golf ball, or fast-shoes, you can get hit one more time before dying.
HOW DOES THE GAME LIVE UP TO IT’S GENRE? (10/10)
This falls perfectly into the section of great platformer. The Sega Genesis Library is full of Sonic the HedgeHog clones. So it’s nice to have a title like this that isn’t one of those. Don’t get me wrong though, I love all the cartoon platformers that cloned Sonic, most of them are pretty amazing. It’s just nice to have one that adds the element of a real old school style one, with new mechanics.
THE ‘GAME OVER’ ALL? (90%)
I really enjoy this game, I would say it’s the best of all the Addam’s family games. If you look at old reviews of this version vs the SNES version. They will say the SNES version is better due to sound. But, if you’ve played both versions. The Sega version has tons more game play, hidden areas, and just better handling.
The Snes version will only lose a few points in my eyes for the missing stuff and that they didn’t have the sound files when they made it on SNES, so all the sounds are changed. (And sound like someone made fart noises with their mouth)
CHECK OUT THE PLAYTHROUGH.