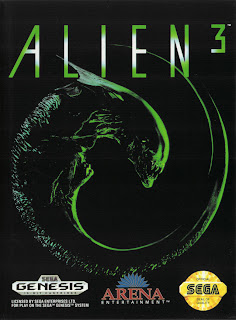 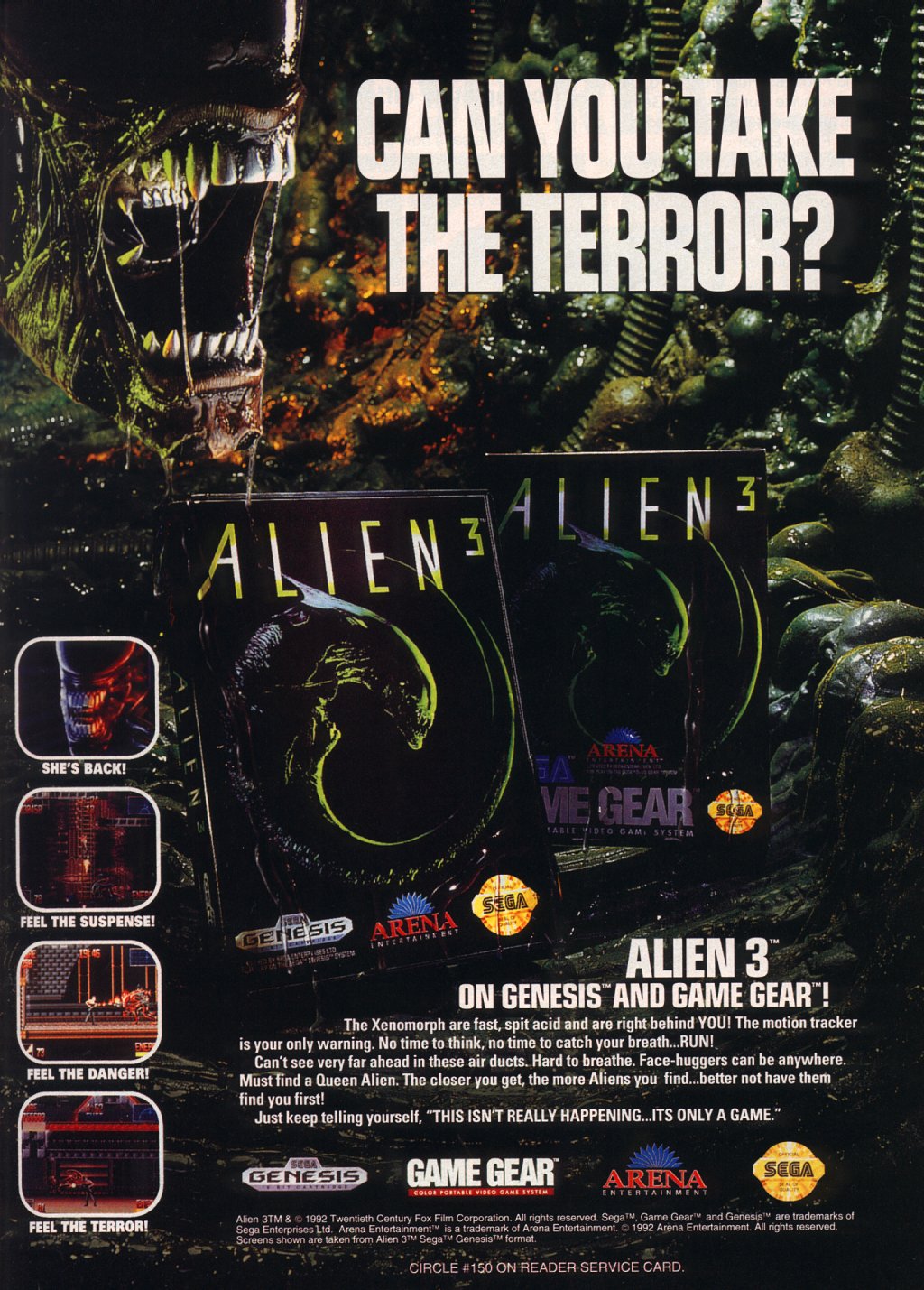 Price: $3-5
Players: 1
As Ripley, make your way through a maze of corridors in a timed race to rescue prisoners trapped in Xenomorph resin, all while trying not to get eaten.
COVER ART/SCREENSHOTS/BOX EXPLANATION (6/10)
If you crash-landed on Earth and had no idea what the Aliens franchise is all about, you’d probably be a little confused as to what the back of the box has to do with the game itself. I took it as a Contra clone, myself, but running around trying to make sure you rescue everyone in a level, in addition to limited ammo, totally screw that. Still, it does mention cramped corridors and whatnot, so I’ll give it the benefit of the doubt. Naturally a picture of a chestburster on the cover doesn’t really explain much, other than it being loosely based on a franchise.
FRANCHISE VALIDITY (2/10)
As far as a movie tie-in, Alien 3 makes about as much damned sense as most other old franchise moneymakers (barring, maybe, Batman Returns), which is… almost none. I’m tempted to say it’s actually based on Aliens and the developers took too much time. It’s possible, though I can’t prove it.
See, while Lt. Ellen Ripley is in the game, and she’s in her shaven-head costume, she’s also equipped with the “I’m going to take out an entire alien hive” weapons from the climax of Aliens. That’s way more than she’d need to jack up the lone dog xenomorph from the movie… but, again, in a more Aliens-esque manner, there are hundreds of the suckers running around.
These were all sacrifices for the sake of entertaining gameplay, I’m sure, because a game based around setting up a trap to lure a single monster into a pit of molten lead would have been fun for about, oh, the five minutes it would take. The third movie sucked, anyway.
I still haven’t figured out how Ripley saves all these dudes, though. They’ve already been implanted, according to the gore that ensues when you fail to rescue them in time. I guess you just shoot ’em in the head to make sure a couple more of the aliens don’t come after you later on.
GAME PLAY (9/10)
So, I wanted a Contra and got something else. Sometimes life is full of pleasant surprises – Alien 3 is solid and intense, from the typical eeriness of a Genesis soundtrack to the rush through dark labyrinths full of speedy aliens.
First, let’s talk about limited ammo. We live in a world where, in today’s games (outside of a few rare survival horror franchises), ammo is plentiful and, for the most part, ridiculously effective. People are happy to park behind chest-high walls and unload their weapons into countless baddies, and more often than not they’re totally replenished after such a fight. Where’s the challenge? Alien 3 gives you four weapons – the typical Space Marine pulse rifle, a short-ranged flamethrower, an underslung grenade launcher, and some hand grenades. As heavy an armament this is, your pulse rifle ammo goes quick and the flamethrower goes faster. The grenade launcher takes a moment to fire, while the hand grenades obviously bounce and have a timer that means they’re not really great, aside from trick shots in ducts. While there is a lot of ammo to be had, especially in later levels you’ll be looking to double back and pick up some you previously left behind… which takes up precious time.
Time is actually what makes this game great. If all you had to do was waltz through some tunnels and blow up everything in your way, it’d be a cakewalk. Instead, you’ve got to rescue everyone on the level, and in doing that you often end up taking a one-way trip back to some other part of the level, screwing up your sense of direction. Even after you pick up the hapless suckers you have to find your way out of the level, meaning you can still fail and have to do it all over again.
Luckily, your motion tracker helps a bit, and identifies sneaky aliens that are going to come charging at you from off-screen like a freight train. Problem is, these require batteries, and there are precious few of them around. Suddenly quick reflexes are a must, and if you get hit, you’re knocked to the ground for several seconds.
There are other little details I enjoy, too. The jump “locking”, meaning you can’t divert your path in the air to avoid something you missed before you hit the button; the health damage from falling even a bit too far; my favorite, by far, is doors being destructible by grenade. It can actually save you time, as manually opened doors take a moment and leave you open to attack by aliens on the other side.
I do have a minor gripe with the sensitivity of ladder dismounting, however. You have to be perfectly level with a floor to dismount, none of that “close enough” that we’re used to from Castlevania’s staircases.
IN-GENRE (ACTION/ADVENTURE) SCORE (10/10)
As far as an action/adventure game goes, this one is right at the top in my book. Lots of platforming combined with solid shooting action and boss fights where you unload tons of grenades (“Foomp! Foomp! Foomp!”) into a bigger-than-normal badass alien and a gripping feeling that you just don’t have enough time make it one of the best in the genre.
THE ‘GAME OVER’ ALL? (9.52)

Right, I know, it doesn’t average correctly… but as far as the franchise and box art are concerned, screw off. This particular gem was kinda like finally getting the chance to punch Rev. Al Sharpton in the face, only to discover your fist gives him cancer, too; that is to say, it’s a nice surprise. I’m not one for patiently figuring out where all the hostages are, but Alien 3 makes it worth the trip. It’s atmospheric, fun, and another shining example of why the Genesis was the best 16-bit system made. While it looks dated, it still plays well, aside from a few minor quirks. If you want a game that gives you a fulfilling challenge, this is it.

…AND ANOTHER THING…
Alien 3 was made for a number of systems, just like the ones based on movies today. Game Gear, Gameboy, and Nintendo all had decent adaptations of this, but the Super Nintendo ran off and did its own thing with the license. It was long and boring, with none of the solidity and tense moments of this one. Stay away from it.
ARBITRARY CREDIT FOR NUDITY/GORE: +.02
If you run out of time, and you will at least once, you’ll see all the prisoners you didn’t rescue have
their rib cages blown out as a chestburster scurries away.
Posted by Fargascorp